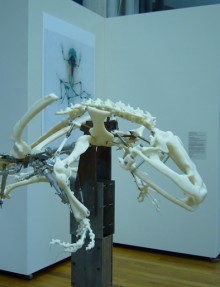 Artificial Mi(s)tosis is an artistic comment on the quest of verisimilitude found in geminoids and humanoids. It is reminiscent of some kind of mad science and the potential of biotech, nanotech, and artificial intelligence eugenics gone wrong. Paradoxically, this robotic artifact is directly derived from a specimen found in nature. It is a living frog found with multiple hind limbs as a product of parasitic infection and symptomatic of environmental degradation. Artificial Mi(s)tosis is an embodiment of an existing natural phenomena that, in turn, is perceived as a fictitious, almost otherworldly, species. It proposes a real artificial-life visualization of an uncanny natural-life living organism.

Louis-Philippe Demers (b. 1959, Montreal, Canada) makes large-scale interactive installations, so far realizing more than 300 machines and participating in more than 70 stage productions. His works have been featured at major venues such as Lille 2004, Expo 1992 and 2000, Sonambiente, ISEA, SIGGRAPH and Sonar. He received four mentions at Ars Electronica, the Distinction of Prix Ars 96, the first prize of Vida 2.0, a mention at Vida 12.0, the prize for Lightforms 98 and six prizes for Devolution in 2006. He was Professor at the scenography department of the HfG/ZKM then he joined the Nanyang Technological University as PI at the Interaction and Entertainment Research Centre and Associate Professor at the School of Art, Design and Media.