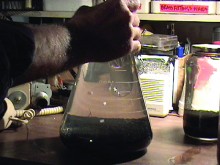 “I grow magnetotactic bacteria. I can only work with laboratory strains in controlled environments, so I collect wild-type organisms that I can freely incorporate into apparatus outside the lab. By chance, I found that one wild strain produced hydrogen gas in anaerobic cultures with catalytic iron filings. These can be used to make fuel and electricity. They also happen to contain principal components of LC circuits ‘in vivo’.”

Joe Davis (b. 1950, Delaware, USA) is an artist and researcher. He graduated in 1973 with a BA in Creative Arts from Mt. Angel College (Oregon, USA). His works incorporate diverse media, including laser and electron beam applications, optical telecommunications and robotics and microfabrication systems to search for extraterrestrial intelligence. Davis has performed extensive research in molecular biology, microbiology and bioinformatics, producing genetic databases and new biological art forms. Between 1980 and 1982 he worked at the German Technical High School in Bremen. From 1982–1992, Davis taught graduate students in the Master of Science in Visual Studies Department at the MIT Center for Advanced Visual Studies and undergraduate students in painting and mixed media at the Rhode Island School of Design. For over 25 years, he has held academic and research positions at the Massachusetts Institute of Technology. Since 1990, Davis has been a Research Affiliate at the MIT Laboratory of Molecular Structure, MIT Department of Biology (Cambridge, Massachusetts, USA). In 2012 he was awarded the Golden Nica for Hybrid Arts in the Prix Ars Electronica (Linz, Austria).