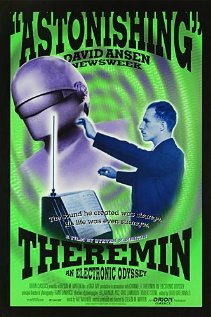 Theremin: An Electronic Odyssey is a 1993 documentary film directed by Steven M. Martin about the life of Leon Theremin and his invention, the theremin, a pioneering electronic musical instrument.

Directed by Steven M. Martin
Produced by Steven M. Martin
Starring: Léon Theremin, Clara Rockmore, Robert Moog, Lydia Kavina, Nicolas Slonimsky, Brian Wilson, Todd Rundgren
Cinematography: Robert Stone
Running time: 83 minutes
Release date: 1993-2003
Language: English
Theremin: An Electronic Odyssey tells the life story of Lev Sergeivich Termen, known in the West as Leon Theremin, a Russian physicist who invented the entire field of electronic music with his remarkable musical instrument, originally called the aetherphone, but soon simply referred to as a Theremin, or Thereminvox (voice of Theremin). It follows his life, including being imprisoned in a Soviet gulag, and the influence of his instrument, which came to define the sound of eerie in 20th Century movies, and influenced popular music as it searched for and celebrated electronic music in the 1960s.

Documentary is a story about a man with a passion for electronics and music, a man with an inventive and radical mind. It should come as no surprise that he had a profound influence on the development of electronic music as we know it.

The Theremin works by moving one’s hands (or any object) near a device with two antennae that manipulate pitch and volume (due to the capacitance changes resulting from the moving object). The Theremin was used to supplement the soundtrack in various movies, including Spellbound, The Day the Earth Stood Still, and The Delicate Delinquent. It also profoundly influenced inventors like Robert Moog (who explains the role Theremin played in the discovery of the Moog synthesiser) and musicians like the Beach Boys (who used it a variant of it, the electro-theremin, in their classic 1966 song, Good Vibrations and a couple of other tunes) and Led Zeppelin (in fact, when Page and Plant reunited a couple of years ago, their live shows featured a Theremin). Throughout the 1920s and the early 1930s, Theremin enjoyed the advantages that came with the fame and success of his invention.

But Theremin’s life was more far exciting than that. Theremin was a Russian who had immigrated to the U.S. In the late 1930s, a decade or so after his instrument was featured in performances at Carnegie Hall he mysteriously disappeared and was presumed dead.

Given Theremin’s contribution to electronic music, Steven M. Martin, a Theremin afficionado, decided to make a documentary about the instrument. During the course of his research, he discovered Theremin was alive in Russia. In the documentary, at the age of 94, we see Theremin recounting what had happened to him: he had been kidnapped by Russian agents for his technological expertise, and was put to work in various places in positions that would help the Russians in the Cold War (and was even awarded a medal by Stalin). As they say, fact is stranger than fiction. There are no special-effects or gimmicks here—this is a factual restatement of events as they happened; the excitement in the documentary is in its content.