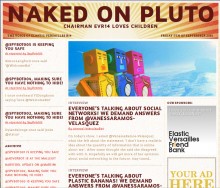 Naked on Pluto proposes a playful yet disturbing online game world, developed with Free/ Libre Open Source Software, which parodies the insidiously invasive traits of much ‘social software’. The city of ‘Elastic Versailles’ is animated by the quirky combinatorial logics of a community of fifty seven AI bots that glean Facebook data from subscribers to the game. Naked on Pluto’s bot crew, which are hard to distinguish from other agents in this text-based environment, are dysfunctional gatekeepers whose access-control means are broken by the participants only to be elastically “healed” by the bots. Players attempt to override the game’s restrictions, teaming up in order to ultimately crash and escape from the system. Reporting on activities via a blog and Twitter, and issuing a constant stream of incitations to click, declare, poke and buy, the bots run havoc with one’s own and one’s friends’ data, generating more or less spurious links with chillingly escalating speed. Disconcertingly familiar faces and information from one’s personal and associated profiles are indiscriminately blended in a brash prosumer landscape which, like the original Versailles, is designed for promotional parades of inseparable personal and ideological attributes. No player information is shared, stored, or relayed back to Facebook in this malleable social ecosystem where all that counts are glimpses of fleeting visibility.

Naked on Pluto caricatures the proliferation of virtual agents that harvest our personal data to insidiously reshape our online environments and profiles, highlighting the ambivalent hallmarks of major social networks: friends as quantifiable and commodifiable online assets, personas carefully fashioned contrived to impart a sense of ‘intimacy’, and disingenuous publishing of ‘private’ data as self-advertising. The emergence of intelligence in this game is ultimately, hopefully, that of the players who manage to escape from it.

Marloes de Valk (NL) is a Dutch (software) artist. She studied Sound and Image at the Royal Conservatory in the Hague, specializing in abstract compositional computer games, HCI and crashing computers. Her work consists of audiovisual performances and installations, investigating machine theatre and narratives of digital processes. She has participated in exhibitions throughout Europe, teaches workshops, gives lectures and has published articles on Free/Libre/Open Source Software, free culture and art (a.o. in the Contemporary Music Review and Archive 2020. Sustainable archiving of born digital cultural content). She is editor of FLOSS Art (OpenMute, 2008) as well as the Digital Artists' Handbook (folly and GOTO10, 2008). She is a former member of artist collective GOTO10, and has helped develop the puredyne GNU/Linux distribution and make art festival. She is currently collaborating with Aymeric Mansoux and Dave Griffiths on a social gaming project.
http://pi.kuri.mu/