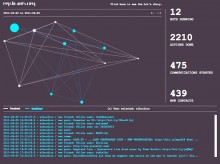 rep.licants.org is a web service allowing users to install an artificial intelligence(bot) on their Facebook and/or Twitter account. From keywords, content analysis and activity analysis, the bot attempts to simulate the activity of the user, to improve it by feeding his account and to create new contacts with other users. Social networks are the first medium showing the social success of a person via a statistical way (eg number of friends on Facebook or followers on Twitter). For many users, reaching the hoped-for success can become a tough and difficult task. Especially when some human factors such as shyness, introversion or personal worthless are present.

The bot does not born with a fictitious identity, but will be added to the real identity of the user to modify it at his convenience. Thus, this bot can be seen as a virtual prosthesis added to an user’s account. With the aim to help him to forge a digital identity of what he would really like to be and by trying to build a greater social reputation for the user. Moreover, this bot can be perceived as a threat by defrauding even more the reality of who is really who on social networks and by showing the poverty of our social interactions on these so-called social networks.

Matthieu Cherubini (b. 1984) graduated from the Geneva University of Art and Design in 2011, where he earned his Master degree in Media Design as well as the Price 2011 Master Design from la Fondation AHEAD. Prior to that he received a Diploma of Engineer in Computer Science from the University of Applied Sciences of Western Switzerland in 2009. He has exhibited at Lift10, Geneva, 2010; Milan Furniture Fair, Milan, 2010; FILE 2011, São Paulo, 2011; Centro Multimedia del Centro Nacional de las Artes (for Transitio_MX), México, 2011 and amberFestival’11, Istanbul, 2011. Matthieu Cherubini lives and works in Lausanne, Switzerland.