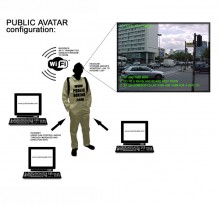 Public Avatar is a project documenting the relationship between virtual reality and our perceptions of self and society. This installation will allow a global audience to explore real-world locations remotely, and to interact with objects and people in those locations through real-time control of a human test subject. As digital and physical worlds collide, the boundaries between self and other, reality and simulation are constantly challenged and redefined.

Public Avatar is available online on special events during the year. The dates and times are announced online. To play, you need a computer and an internet connection. During these events, users are able to login at www.public-avatar.com. Each logged in user is placed in a queue and waits for his turn, when he or she can give simple instructions (such as ‘Turn’+’Left’, ‘SAY’+’hello’ etc) to the avatar for a limited time period. Users can see and hear what Public Avatar sees and hears via live video stream.

The term Avatar, meaning a virtual representation of a user, dates as far back as the Ultima series of computer games (1985), and became popularized by Neal Stephenson in his cyberpunk novel Snow Crash (1992). It was also in this novel that the term Metaverse (for a 3D virtual-reality version of the Internet) was born. Public Avatar seeks to turn the virtual back into everyday reality, replacing polygons and pixels with a human being in a real-world location, albeit under computer control.

The project explores real virtuality, by which we mean the echo of virtual reality in reality itself. It examines the essence of reality and explores the borders between virtual and real. Presupposing that virtual reality, internet applications, networks and games not only reflect the society and reality, but also predict its development (e.g. Ghost Recon), we can say that Public Avatar explores social reality of the present and the future.

Martin Bricelj Baraga is a media artist and freelance curator. His interactive works, audiovisual performances and collaborative work research the relation between man and machine, social aspects of contemporary pop culture, future monumentalism and political dimensions of our mediated realities. He has exhibited in many galleries and spaces worldwide: ICA in London, Sonar in Barcelona, TodaysArt Hague, Columbia University in New York, FACT Liverpool, Kinetica ArtFair, Centro cultural Recoleta in Buenos Aires, Kunsthaus Graz, Kaapelithas in Helsinki, Museums Quartier in Vienna and many others. His work has been reviewed and published by Wired, boingboing.net, Pecha Kucha, the New York Art magazine, Harper Collins, El Pais, Actar, Mladina and others. His project Everlandia was one of most visited exhibitions at the ICA London. It has been selected for Top five events nationwide in UK Times. Other media highlights include a special feature in TimeOut and an interview on BBC Radio1. Media-Reality hack FakeUp has been featured as a true story in many media - it involved TV, press, radio and many websites. His Memory project received Europrix Award in 2006. His presentation of Pornogobelin project has been selected out of thousands presentations worldwide as one of the 30 best PechaKucha presentations. His recent project RoboVox - a large (8m high) interactive public sound installation has recieved Europrix Multimedia Award in 2008. He is the founder of SONICA Festival in Ljubljana and director of MoTA - Museum of Transitory Art.
http://www.martinbricelj.com