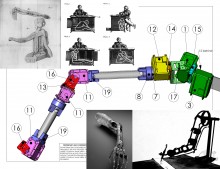 Within the realm of human-machine interactions, Social Robotics deals with the underlying complex rules and roles of the society. Such robots do not assume servile and mundane tasks, as in an assembly line, but rather connect with humans in their very own context. For instance, we find robots as learning assistants, as healthcare caregivers or as receptionists. The Blind Robot is about the understanding of the degrees of engagement, would it be either intellectual, emotional or physical, that are generated when a Social Robot intimately touches a person.
The Blind Robot comprises of a typical robotic arm equipped with an articulated hand. In this installation, visitors will be invited to sit in the front of this machine and engage into a non-verbal dialogue with this machine. The robot will delicately explore the body – mostly the face – of the visitor in a manner that recalls what the blind humans are doing to recognize a person or an object. On a nearby screen or projection, the machine will then produce a visual rendering – a window to the soul of the robot – of what its fingertips have “seen”.
At its onset, The Blind Robot is a minimalistic piece of mechanical engineering. The rationale is to start from a recent known cultural artefact – the robot arm – and transform it from a high precision tool into a fragile, imprecise and emotionally loaded agent. The Blind Robot project is not concerned with the aspect of use (technicality of touch itself) but rather with the consequences for bodily objectivity and the subject’s awareness of those consequences.
Our hypothesis is that the social role (a blind) will augment the act of touching via the potential of the created emotional connection between the human visitor and the robot. The Blind Robot becomes an artistic and critical investigation of the scientific developments in Social Robotics.

Louis-Philippe Demers makes large-scale installations and performances. His main areas of work are entertainment robotics and interaction design. Over the past two decades, he has participated in more than one hundred artistic and stage productions and has built more than 300 machines. His projects can be found in theatre, opera, subway stations, art museums, science museums, music events and trade shows. Demers’ works have been featured at major venues such as Lille 2004, Expo 1992 and 2000, Sonambiente, ISEA, Siggraph and Sonar. He received four mentions at Ars Electronica, the Distinction of Prix Ars 96, the first prize of Vida 2.0, a mention for the Tiller Girls at Vida 12.0, the Interactive prize for Lightforms 98 and six prizes for Devolution including two Helpmann Awards, the Australian equivalent of the Broadway’s Tony. He was Professor of Digital Media and Exhibit Design/Scenography at the Hochschule für Gestaltung Karlsruhe, the academic institution affiliated to the world renowned Zentrum für Kunst und Medientechnologie (ZKM, Germany). Recently he joined the Interaction and Entertainment Research Centre and the newly founded School of Art, Design and Media at the Nanyang Technological University (NTU, Singapore). www.processing-plant.com

The Blind Robot is a 2011–12 development commission for the Robots & Avatars project. Commissioned by body>data>space and the National Theatre. Partly supported by the “Nanyang Technological University, Interactive Digital Media Start Up Grant”. The project is funded by the EU Culture programme with additional support from Arts Council of England.