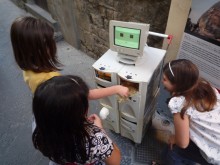 The robot for the materially deprived is constructed entirely from old computer hardware and a few spare parts that can be obtained at no cost. Computers are nowadays more or less treated as basic home equipment and cultural code, no longer reserved for a few privileged individuals as a technology. This is why ‘Žicar’ (Beggar) can step up in the name of the materially deprived, while at the same time preserving their anonymity and dignity. It has access to areas normally off-limits to beggars, such as shopping malls and community events, where the richer part of the society frequents – the part of society that is only able to show some sympathy towards the marginalized if they communicate from a safe distance and via a technological interface.
The past few years have brought about social changes, which have introduced an increasing percentage of poverty into the general picture of the society. Living in poverty or on the fringe thereof are marginalized groups such as impoverished individuals and families, refugees and asylum seekers, elderly people, disabled people… Most of them, hidden from the public view confined in their homes, will never step onto the street to beg, except in most dire circumstances. Because of technology expansion today, there are many new ways of begging; e-mails with spare some change content, begging web sites, multiplayer games begging and a robot for materially deprived.
http://www.sasosedlacek.com/anglesko/projects_beggar.htm

Sašo Sedlaček is, no doubt, one of the key figures of contemporary art in Slovenia. He has received several awards (OHO, Vida 11, Spaport, Zogo Toy, etc.); he has been an artist-in-residence three times (in Germany, Japan and the United States); he has had exhibitions in Slovenia, Japan, Taiwan, the USA, Austria, France, Belgium, Italy, Serbia, Russia, Estonia, etc. – including established exhibition venues such as the Secession in Vienna and the Lentos Museum in Linz – and he has participated in major international biennials (Taipei, Taiwan 2008 and Ogaki, Japan 2006) and festivals.

His project The Big Switch Off was just on display at the Project Space Aksioma in Slovenia. He has recently problematised the sell-out of frequency space (Manifesto, 2008, and Infocalypse Now!, 2007) and he is particularly recognisable for his interventions into consumer Meccas: using bricks made of printed advertising materials, he closed the entrances to department stores in Ljubljana (Just Do It!, 2003) and built a pavilion for eavesdropping and dwelling in BTC City (Loop, 2004); in 2006, he took the Beggar – a robot for the materially deprived, which he lent to the homeless people of Ljubljana the following year – for a walk around Citypark and the streets of Tokyo and Taipei; etc.