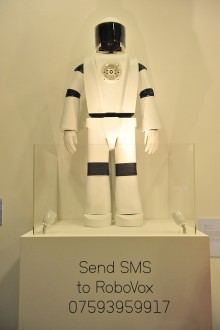 RoboVox is a large (8 m high) interactive public sound installation, using SMS for general public interaction. It is installed in crowded metropolitan squares preferably on those carrying some social or even political connotation.
The purpose of RoboVox is to serve as a tool for an individual whose voice usually gets lost in the sounds of the mass, the society. An individual can send a text message using his mobile phone to the dedicated RoboVox’s number. Upon receiving the SMS RoboVox will say out loud the statement, protest, declaration of love, or whatever the message may read, thus lending its voice to the anonymous individual. Send SMS to 040-609-739 during the exhibition period.

ROBOVOX AT KIBLA
In the context of Robots and Avatars we are presenting an exclusive hosting of RobVox Prototype, an interactive public installation in the form of a humanoid robot, at KIBLA.

Martin Bricelj Baraga is a media artist and freelance curator. His interactive works, audiovisual performances and collaborative work research the relation between man and machine, social aspects of contemporary pop culture, future monumentalism and political dimensions of our mediated realities. He has exhibited in many galleries and spaces worldwide: ICA in London, Sonar in Barcelona, TodaysArt Hague, Columbia University in New York, FACT Liverpool, Kinetica ArtFair, Centro cultural Recoleta in Buenos Aires, Kunsthaus Graz, Kaapelithas in Helsinki, Museums Quartier in Vienna and many others. His work has been reviewed and published by Wired, boingboing.net, Pecha Kucha, the New York Art magazine, Harper Collins, El Pais, Actar, Mladina and others. His project Everlandia was one of most visited exhibitions at the ICA London. It has been selected for Top five events nationwide in UK Times. Other media highlights include a special feature in TimeOut and an interview on BBC Radio1. Media-Reality hack FakeUp has been featured as a true story in many media - it involved TV, press, radio and many websites. His Memory project received Europrix Award in 2006. His presentation of Pornogobelin project has been selected out of thousands presentations worldwide as one of the 30 best PechaKucha presentations. His recent project RoboVox - a large (8m high) interactive public sound installation has recieved Europrix Multimedia Award in 2008. He is the founder of SONICA Festival in Ljubljana and director of MoTA - Museum of Transitory Art.
http://www.martinbricelj.com