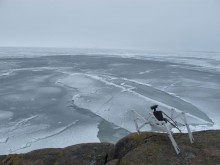 ZOE is an attempt to represent human and interpersonal relationships through machinery, describing social phenomena through principles of movement, although the causes of these principles are (still) unknown. For this art project I use active and reactive objects whose formalized behaviour triggers emotion and life. In my point of view, machines are neither intelligent nor do they have feelings. Emotions entirely exist on the human side. In other words, machines and therefore robots do not bear emotions. But they can produce feelings because of their behaviours and during their utilization. They are some kind of emotional prosthesis.
The robots do not seem lifelike because of their appearance, but gain the appearance of vitality by their movements. They act and react with the environment. They create emotions in the viewer, once it is fear, other times it is joy, anger, resignation, or just a non-feeling of understanding. These aroused emotions correlate with the alleged behaviour of the machine.
Each of these individual objects is independent, but together with the other objects of ZOE they build a (intelligent) connection. The swarm without its own physicality is defined by the social group. The ability of the human to anthropomorphize creates in the recipient the appearance of a social group which belongs together.
The performative installation variation of ZOE is an interactive robotic representation of the human body and its social implications. By observing and playing with the individual robots or the whole group, ZOE opens new points of view towards machinery, robotic and artificial behaviour and artificial life.
Additionally there are photographs of ZOE exploring the icy island of Suomenlinna next to Helsinki, Finland, where the robot seems to be exploring the surrounding outdoor environment, and staged in a way, seeming to have the same emotions and desires as humans.

Niki Passath (b. 1977, Graz) is a robotic artist and is engaged in his work with the sculptural conditions of robots and the idea of artificial intelligence. He currently lives in Vienna and teaches at the University of Applied Arts Vienna, where he made his degree in digital art. Niki Passath also studied violoncello at the University of Music and Performing Arts in Graz and architecture at the Technical University in Graz and at the École d´Architecture Laungedoc Rousillon in Montpellier. He has received the Theodor Körner Prize for his work Architecture Mules, which translates generative design capabilities of 3D software into real space.